Get fresh music recommendations delivered to your inbox every Friday.
We've updated our Terms of Use. You can review the changes here.

All Is Dust and I Am Nothing 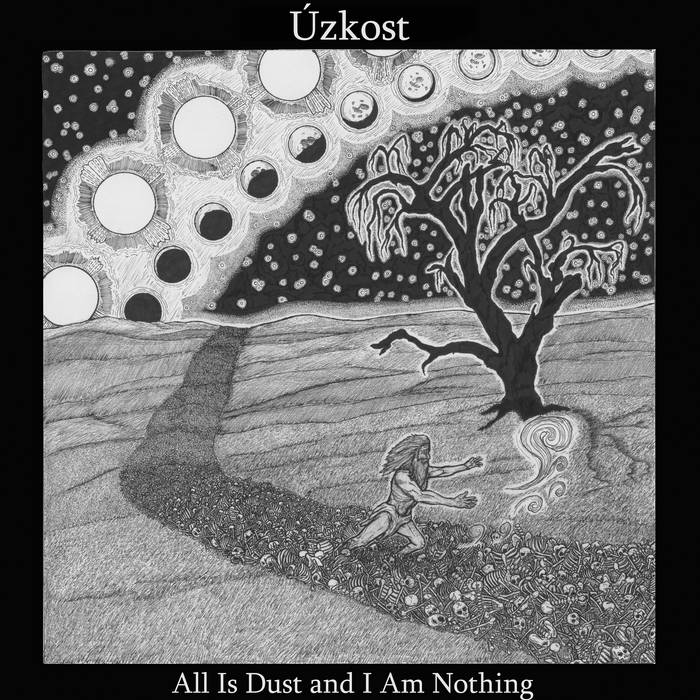 "All is Dust and I am Nothing" is the first full length LP from Pittsburgh's Úzkost. The release marks the culmination of three years of writing and recording that tracks the band's musical evolution from 2012 to 2015. The album is a concept album that is based upon a subject matter that is as bleak as the music, the book of Ecclesiastes. "All is Dust and I Am Nothing" chronicles an exploration into the meaning of life as the band drew upon their many influences to discover new sounds.

"All is Dust and I am Nothing is an impressive warning shot fired into a crowd of lazy genre-mashers; Slaves BC show that they are deadly serious about their craft and their career, and you'd do well not to get in their way."
-- Kim Kelly @ Noisey
noisey.vice.com/blog/slaves-bc-album

"It discusses the meaning of life, the inevitable death of everything, and that all actions of man are done in futility. Slaves BC take that absolutely savage story and manipulate it into an album equally as savage and sincerely crushing."
-- Nick @ CVLT NATION
www.cvltnation.com/blackened-hardcore-holiness-slaves-bc-all-is-dust-and-i-am-nothing-review/

"Prepare thy selves. Lace up your Doc Martin's, put an eternal scowl on your face, load up on painkillers and hide that sweatpants boner because it all boils down to one word: KILLER."
-- Matt Hinch @ Metal Bandcamp
metalbandcamp.com/2016/02/slaves-bc-all-is-dust-and-i-am-nothing.html

"All Is Dust And I Am Nothing is my favorite album in this style that I have heard in years."
-- Matt Jamison beardedgentlemenmusic.com/2016/02/16/slaves-bc-all-is-dust-and-i-am-nothing/

"Humanity is garbage and everything is meaningless, but Slaves BC have recorded the perfect album to tide you over until the world collapses in on itself."
-- Nathan Sizemore @ xtapolapometal
xtapolapometal.wordpress.com/2016/01/18/allisdust/

"Between its sound and its subject matter, this album is quite the soul-crushing experience, an experience I cannot recommend highly enough."
-- Eric Yanyo @ Valley of Steel
valleyofsteel.net/2016/02/05/slaves-bc-all-is-dust-and-i-am-nothing-2016/#more-4862

"Mosh riffs, blasts, its like a farm kid getting sucked into a combine: a horrifying onslaught of blood and guts spraying all over the place, and machinery grinding on bones"
-- Jason Luchka @ Supercorrupter supercorrupter.wordpress.com/2016/02/12/album-review-slaves-bc-all-is-dust-and-i-am-nothing/

The Fear and the Void Recordings Pittsburgh, Pennsylvania

Bandcamp Daily  your guide to the world of Bandcamp

Alex Rita and Errol from Touching Bass feature in our special London edition of the Bandcamp Weekly.